Stay in touch and receive occasional news and updates that will encourage, inspire, inform and equip you!

Snakes and Snails and Bird Wings

I’ve told you before about some of the things my son has done, like tie a tarantula to my steering wheel and stick soap planets to the shower wall.

And then of course there was the big, bad red thing in my kitchen.

Most recently, he’s been into snails and slugs. In fact, he’s had one snail (that he calls a worm) for about three weeks now…

In case you can’t read his writing on the outside of the snail house, my son is the proud owner of Phillip Johnny Bob Joe Rex, “awesomest” worm (snail).

He has a real worm too.

And a cute little pot to keep them in…

But none of that is as bad as the bird wing…

Remember the baby birds I told you about, and how they didn’t make it?

The other day, my son came in from playing in the backyard and said, “Mom, something dug up Tibbles.”

“Because look what I found…”

And he held up a plastic bag with a bird wing in it. 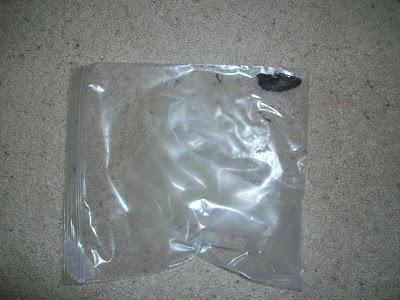 I tried not to freak out. “Did you touch that with your bare hands?”

“Go wash your hands really good. Right now. And then put that wing back outside.”

A keepsake? I tried to remember to see things from his perspective. “It won’t last,” I explained. “And, besides, it has germs on it.”

“No it doesn’t,” he said, matter-of-fact.” I already washed it with soap and put hand sanitizer on it.” He proudly held the bag closer for me to see.

And sure enough, that little wing was gooped with sanitizer gel.

But I promise you, that didn’t change my mind.

Because, somehow, keeping a wing in a plastic bag creeps me out a tad more than having snails and worms as pets.

Or finding my daughter’s mouse in the laundry basket.

Or even discovering crickets all over the house. :)

All the things I’ve written about…