Stay in touch and receive occasional news and updates that will encourage, inspire, inform and equip you!

A Whole Bunch of Firsts…

It’s been a while.

When I decided to take a break from blogging, I had no idea how long I’d be “away”. I needed to revise my young-adult novel, and sometimes revisions are quick.

But sometimes they’re not.

This time they weren’t.

Partly because, in addition to working on my novel and other writing projects, I was inspired to write a non-fiction book for moms. One thing led to another, and the next thing I knew, I had a 163 page manuscript that I’m now polishing.

But life is funny that way sometimes—you plan on doing one thing, and another thing happens that sort of changes your plan.

Which is kind of how my summer’s been so far.

I’d planned on kicking it off swimming with the kids, seeing friends, and going on a few short trips.

Instead, I’ve started it off in a wheelchair.

In two separate, random falls (I still can’t believe it), I broke my arm and tore my knee.

All in the course of one week.

And all when my husband had to travel to India on business for ten days.

I’ve had a whole bunch of firsts lately…

My first set of crutches (that I ended up not being able to use because of my arm).

My first wheelchair (that I ended up getting because I couldn’t use the crutches. And which our cat seems to like.)

And my first ride in one of those electric scooters at Target.

It’s been a learning experience, too…

I’ve learned how to blow dry my hair and put my makeup on with my left hand (I’m still having mascara issues).

I’ve learned how to go up and down the stairs using one arm and one leg.

I’ve learned how to type with my cast on.

And—maybe the hardest part for me—I’ve learned how to accept help from others, because I’ve needed it.

I know what I’ve been going through is small compared to what some people endure.

I’ll be honest, though—as someone who usually runs around at full speed and is very independent—it’s been hard having life come to a sudden halt.

But it’s been one of those blessings-in-disguise, too.

I’ve had family and friends staying with me and helping, which has given us some great time together. And I’ve had more time with my kids, too.

And even though I’ve had my share of melt-downs and tears, I’ve also had some good laughs. Mostly at myself. Like when I wiped a dot of mustard off my plate with a finger on my right hand, went to lick my finger, and realized I couldn’t get it to my mouth because of my cast.

A lot has happened on my little break from blogging…

Spot and Blackberry—the mice that brought us so many adventures—died not too long ago, within a few days of each other. It was hard on the kids, but they felt better after the funeral, complete with music and eulogies and a lavish burial. 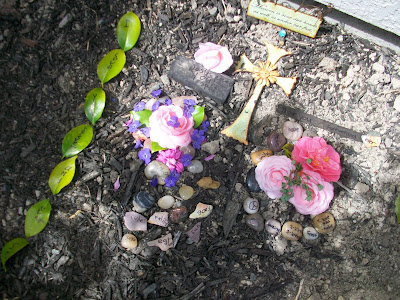 I’ve also been fortunate enough to be able to write for some great sites, like PluggedinParents and MothersClick. And I was asked to participate on a conference call with Maria Shriver about her WeConnect campaign in California. She’s an inspiring woman with a true passion for what she does, and I was honored to write an online exclusive about her campaign. I put together my Web site too, which has some writing resources and links to check out if you’re interested.

I guess I’m just glad to be back.

I don’t know what my posting schedule will be yet. It depends on a lot of things, like if I end up having knee surgery or not.

But I’ll be around.

And I hope you will too. I’m looking forward to doing some fun things around here. :)

All the things I’ve written about…